Three people have died and several more were injured when a man opened fire on a tram in the Netherlands.

The shooting happened at 24 October Square in the city of Utrecht….

Schools, mosques and transport hubs were put on lockdown but that has since been lifted by the police….

The police are waiting for explosives experts after the discovery of a suspicious package at the ROC Nieuwegein.

The building has been evacuated….

Police revise down number of injured to five

Utrecht Police have revised down the figure of those injured in the shooting – from nine down to five….

Meanwhile a witness has told Dutch media he felt that the perpetrator “focused on a [one] person”….

According to Dutch news site Het Parool the four were armed with at least two weapons and shouted ‘Allahu Akbar’, which means ‘God is the greatest’ in Arabic 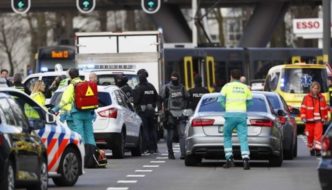 Netherlands: Counter-terror chief confirms there have been shootings at multiple locations in Utrecht today

A counter terrorism chief confirmed there had been shootings at multiple locations in the city….

THE TRUTH MUST BE TOLD

Please take a moment to consider this. Now, more than ever, people are reading Geller Report for news they won’t get anywhere else. But advertising revenues have all but disappeared. Google Adsense is the online advertising monopoly and they have banned us. Social media giants like Facebook and Twitter have blocked and shadow-banned our accounts. But we won’t put up a paywall. Because never has the free world needed independent journalism more.

Everyone who reads our reporting knows the Geller Report covers the news the media won’t. We cannot do our ground-breaking report without your support. We must continue to report on the global jihad and the left’s war on freedom. Our readers’ contributions make that possible.

Geller Report’s independent, investigative journalism takes a lot of time, money and hard work to produce. But we do it because we believe our work is critical in the fight for freedom and because it is your fight, too.